FOR BEGINNING TO ADVANCED 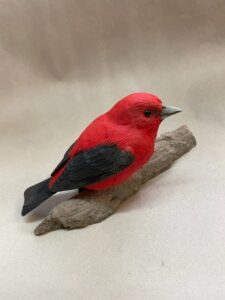 The class will be taught by world-class international award winning wildfowl carving artist, Tom Baldwin. Students will start with a bandsawn blank and complete a fully detailed and painted wooden bird (Scarlet Tanager) that will look as though it could fly away when finished. This class is structured for people who have little or no experience in wood carving.  Students will learn the techniques of micropower carving using Tupelo wood. CVAC will provide the tools necessary for this class.  Students must provide their own acrylic paints and brushes later for the painting portion of the class. If you like birds – you are going to love this class. A $25 material fee is included in the final price. M $175 NM $198

Tom Baldwin is an internationally award-winning wildfowl carving artist.  He recently won 2nd Best in the World at the 2017 Ward World Wildfowl Carving Championship in Interpretive Division,  M & T Printing purchase award at the Canadian National Wildfowl Carving Championship, and has won back-to-back Best in Shows at the  Wings and Water Festival,  Award of excellence at the 2014 Kaleidoscope Holiday show, 1st place at the 2015 Kaleidoscope Holiday show, top 5 runners up for the Akron High Arts Festival 5 years in a row and Best of Show at the 29th Annual Regional Juried Art Show at the Cuyahoga Valley Art Center.  Tom also received the best sculpture award at the 70th Annual Ohio Exhibition at the Zanesville Museum of Art. Tom’s new book “Three Carving Projects for the Beginner” was released in 2018.

Tom lives in Akron, Ohio with his wife, Barbara, and their two dogs.

You can see his work at www.songsofwood.com